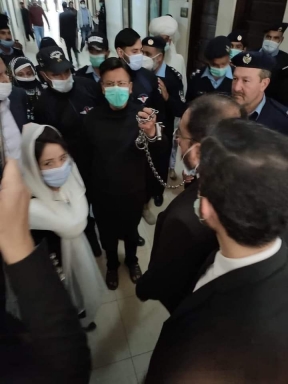 Leaders of different bar councils and associations have collectively demanded immediate release of the lawyers arrested in federal Capital following hooliganism at the Islamabad High Court the other day. At a joint press conference Thursday, the leaders claimed some “hidden hands” wanted to exploit the prevailing tension between the judiciary and the lawyers. They also announced to start a countrywide protest if demands of the lawyers were not met. Lahore High Court Bar Association’s President Tahir Nasarullah Warraich, Pakistan Bar Council’s member Azam Nazir Tarar, Supreme Court Bar Association’s Vice President Arshad Bajwa, Punjab Bar Council’s Vice Chairman Amjad Iqbal Khan and Lahore Bar Association’s President Malik Sarood Ahmad were prominent among the speakers at the press conference. They feared if the dispute was not resolved amicably and immediately, the situation could worsen not only in Islamabad but the whole country. They said Islamabad lawyers were holding protest against ‘state terrorism’ when some of them got emotional and crossed limits of legal protest. They condemned the police raids on the homes of the lawyers and their arrests. The representatives of the bars demanded the Chief Justice of Pakistan to constitute a committee comprising lawyers and judges to look into the matter.